We'd been warned. We even took measures to avoid it. But the onslaught of the ferocious streams of water that pelted our tent after midnight still came as a shock.

We knew that there was a sprinkler system at the park. But due to budget cuts, there were notices on the park website stating that the water had been shut down. The nice showers and flush toilets would not be available to us, but we were willing to rough it.

What wasn't clear was whether the shutdown included the sprinkler system or not. The abundance of lush green grass was a hint, so I wandered over to talk to the camper where a few folks were sitting out enjoying the evening. They didn't know the status of the sprinklers. But being veterans of the park, they did inform me about the sprinkler guards. Short half-cylinders with stakes were available to direct the spray away from a tent. What an ingenious idea! Since we had unwittingly erected our tent within a few feet of a sprayer, we put one of the guards in place, just in case.

Not long after midnight, sure enough the sprinklers started up. We could hear them in other areas of the park, and within half an hour the one right behind our tent activated. But the guard did its work, and we were safe. We thought.

We had left the front flap of our tent open because it was so warm. When a light spray filtered through our screen, blown from a distant tap, we thought it would be prudent to close the flap. No sooner had we done so when another sprinkler started up. This one was a totally different variety. It was a strong stream that shot out with a much greater range, pivoting 360 degrees. It didn't take long to reach our tent. Wham! It pelted the front of the tent as it passed. But our trusty rain fly held and we stayed dry, even as it continued its rotation sending round after round of water at us.

That wasn't all, though. The spray also doused every inch of the picnic shelter where we'd left our bikes, panniers, shoes and other remaining articles for the night. A quick foray out into the wet night revealed puddles on top of our panniers, and a dripping table. Shuffling our gear to the dryest spot I could find, I retreated to the tent.

I guess with such a dry climate, watering only works when applied in abundance. Those sprinklers kept up for three hours, alternating positions around the park. Even when those within range of the tent shut down, I could hear them start up elsewhere, and I couldn't let go of the worry that our gear was getting soaked again. Not much sleep was had, especially when you add frequent trains rumbling past.

On a more positive note, we were treated to a nice sunrise. (Okay, so only Rich saw it and took this picture.) And the air dried our not-too-wet belongings fairly quickly. Let's hear it for those zip-lock bags. 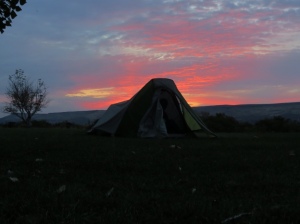 Yes, it was a memorable night.