I was under the mistaken impression that as soon as we started following the Columbia River west, we would be in “the gorge.” My lack of homework showing. So despite following the river around the bend and another 50 miles downstream, we still have another day or so before the transformation from desert climate to the lush green gorge between mountains. We're just not there yet.

As a result, the dry rocky landscape continues. There is a certain beauty in it, and we found some especially interesting formations while turning the corner of the river. Ready for a snack, I pulled over into a roadside pull-out. It just happened to be at the Two Sisters rocks. Not a bad place for a rest and a short respite from the big trucks on the road. While that was one of the harrier sections of highway we've traveled, overall the semi drivers have been universally courteous on this trip. Unless there is an oncoming vehicle, they pull over to give us extra room away from their big bulk and strong slip-stream.

In addition, the hot, dry and sunny weather that has been the norm persists. Today turned into a real scorcher. There was little wind, and it actually felt much better cycling and creating a breeze than it did stopping to rest.

Originally this was to be a short day, going only 37 miles to the Crow Butte State Park where we planned to camp. But a conversation with our Warm Showers host last night revealed that the park had a large population of rattlesnakes and scorpions! Being the Minnesotans we are, totally without experience with snakes and posessing a healthy fear of them, we quickly revised our plans. We targeted a small campground in Roosevelt WA, which made for a 60 mile day instead. 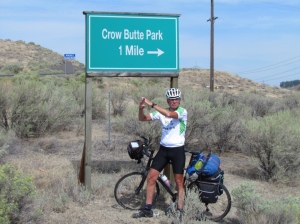 Normally 60 miles would not faze us. But throw in temperatures well into the 80s and our strength was zapped prematurely. The miles seemed endless, and never mounted up quickly enough. To add to the equation, our various map apps disagreed on whether there was even a gas station near the campground, and the presence of a café was mere rumor. We'd stocked up on food just in case, but the thought of a cold drink and a late lunch sure was appealing. If ever we got there!

The road sign read Mini Mart and the word “Open” lifted our hearts. Stepping inside the door revealed a tidy shop/café, exceeding all our hopes. We sat down gratefully in air conditioned comfort and enjoyed the best tasting meal in ages. Having cooled down, filled our stomachs, refilled our water bottles and splashed water on our faces, we happily cycled down to set up camp in the park by the river. We are already planning to return for breakfast tomorrow. I have my heart set on the huckleberry pancakes.

We made it. For today, we're finally there.