Today's marathon was not ours but our son, Erik's. While we cycled through Texas, he ran the Boston Marathon! Having done it twice myself, I knew what a big dealt was for him and was so excited to follow his progress virtually through the race text updates. 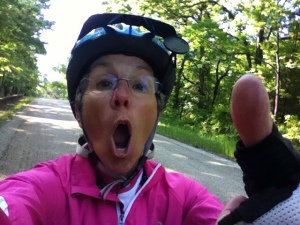 Carefully watching the time, when his 10am Boston starting time arrived, I shouted out “Go Erik!” for anyone in the Texas countryside who might be interested. And I couldn't resist sending a selfie to his fiancé to let her know I was out there cheering for him.

I'm afraid I don't recall a lot of the scenery we passed through this morning. My thoughts and my heart were in Boston with Erik. I was too busy calculating times, distances and remembered visual references on the course to notice what we were passing. While we had beautiful clear skies and bright sunshine yet a cool wind, I knew from checking the weather reports that he was dealing with a stiff headwind, rain and temperatures in the 40s. I didn't envy him that bit. 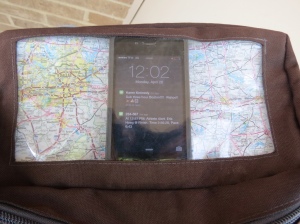 I chose a new alert sound for my texts to one I might hear better, and positioned my iPhone in the top of my handlebar bag in the hopes of seeing the texts as soon as they came in. Rich wasn't thrilled when I insisted on stopping each time a new report came through.

To add to the excitement, the whole family was group texting their support and reactions to his speedy pace. And of course I had to enter the fray on those exchanges as well. Never did a runner have so much activity on social media!

Rich played it cool, getting his updates from me. But he got a taste of what was going on when he tried to consult his smartphone maps to figure out our next turn. He found 26 texts awaiting his attention!

The anxiety was intense as Erik neared the end of the race. I could hardly wait for that “Finish” text! When it came through, I was thrilled to see his sub-3 hour time – 2:56:28! The texts flew even faster then, as we all shared in his victorious finish.

I had to laugh noticing that we completed 29 miles in 2:46 this morning while Erik ran 26.2 in 2:56. He ran just about as fast as we were able to cycle! In our defense, we had some city traffic to navigate and frequent stops for text messages, but that hardly negates his accomplishment.

The best part was getting the blow-by-blow account of the race from Erik later in the day. I loved his comment about how NOW he gets it, and just how tough Boston is as a marathon. That I could relate to. But I'll never experience his pre-race drama. Starting in corral 2, he just happened to be in the right position to high-5 all the elite runners when they came out to take their place right in front of him at the starting line. Wow! Now that's a runner's high. Well done, Erik!