It's really hit or miss. When bike touring, we don't plan very far ahead. A day or so for lodging and hours or minutes prior to looking for a meal. Google reviews or consulting TripAdvisor is sometimes helpful, but nothing is guaranteed to be accurate. So finding those hidden gems with folks who deliver exceptional service is often pure happenstance. And we've had a run of good luck recently. 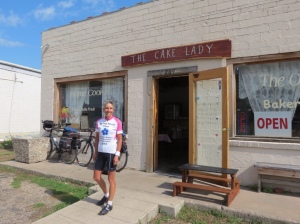 Take The Cake Lady. Her bakery café in Mt. Vernon was the only place we found open, so our breakfast decision was made for us. The spotlessly clean and spare room bore no hint of the quality of the meal to come. Everything was simple but home made, down to the freshly chopped and cooked potatoes which Rich declared the “best ever.” I gratefully accepted the healthy alternative of fresh tomatoes, which was a nice touch. But the best was yet to come. With our large, moist biscuits hot out of the oven, she brought out a large canning jar of strawberry jam – from freshly picked berries and made just the night before. It was like spreadable sweet sunshine atop those tasty biscuits. I just had to request a second one.

Just outside of Clarksville, we came upon yet another Historical Marker. But this one was unlike all the other anonymous plaques. Flanked by both US and Texas flags, and adorned with the bountiful rose trees we have been admiring, we had to stop and check it out. This one was dedicated to Police Officer Tippet, who was gunned down by Lee Harvey Oswald when he stopped him for questioning after JFK was shot. The sight was near the farm where he grew up. This man who gave his life in the line of service was well worth commemorating.

Approaching our last night in Texas, we found little to recommend the motel on the outskirts of Clarksville, and independently we each mentally justified the alternative of staying in the town's B&B. It was conveniently located in town and we looked forward to the splurge after some grim motel rooms. We were greeted with great enthusiasm by Perry, the owner of the Courthouse Inn B&B and instantly knew we'd made the right choice. It was more like being welcomed into his home than a formal guest scenario, as he heartily encouraged us to bring our bikes right on inside and saw to our every need.

When dinner time approached, Perry came through with a wonderful recommendation for the Italian Bistro down the street. There the young owners not only served up a delicious meal, but provided the best service we've ever had. In fact, they colluded with Perry to make it an extra special meal for us. It was such a mild evening that I returned to the front porch of the inn to read until bedtime, while Rich captured the inn, courthouse and me in some fantastic night time photography.

It was a luxury indeed to relax the next day while the overnight rains continued into the morning hours. Perry doled out equal amounts of entertaining conversation and story telling with his cooking, and assured us we could hang out as long as needed.

They say good service is hard to find these days. We've certainly gotten our share lately. Thanks, folks!