It was a month ago that we decided to do a cycling trip in Wisconsin. Having just returned from St. Louis in early May, the thought of repeating that long drive again in June for a family wedding was, well, not the most appealing. The solution? Stop and bicycle, of course! 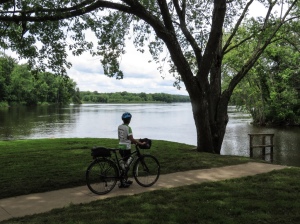 Molly looking out over the Wisconsin River

Rich picked the route, and since he does 99% of the planning for these adventures and is very good at it, I tend to trust his work and show up when the time comes. In my defense, I did ask him where we were going, but I got only a vague answer. I probably asked when he was preoccupied with editing his bird photos. I should know better. By the time we left, I knew we were going to cycle along the Wisconsin River.

Meanwhile, our two sons decided to meet up for a weekend of canoeing. Since Erik lives in Minneapolis and Carl is in Milwaukee, they chose somewhere in Wisconsin halfway between them. They were about as communicative about their plans as Rich was. In fact, I first heard about their trip from our daughter.

It was only after completing our cycling trip that I thought to ask the boys where they were going. “Oh, somewhere on the Wisconsin River,” Erik replied. When I pried the details out of them, I had to laugh. They are about to cover a good share of the same stretch of river we just did! 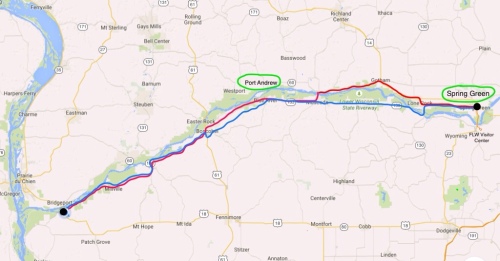 The boys' entry and exit points circled in green

As Erik put it, the Wisconsin River must have been calling to the Hoegs this week. What are the odds of that happening?