Some of the best finds are the ones that appear spontaneously by the side of the road. They aren't in any tourist guides. They don't show up on Google Maps. They have no feedback ratings. They are just there, and we are in the right place at the right time. On our bikes.

It's not surprising that these stands frequently involve food. Any touring cyclist is a hungry cyclist, and particularly vulnerable to such offerings. And we are no exception. We have availed ourselves of a number of worthy delicacies through our journey along Michigan's west coast.

Farmers Markets are always a favorite of mine. The brilliantly colored fresh veggies in their attractive displays are like eye candy. And I always keep an eye out for the bakery booths, for a treat. When we happened on the market in Harbor Springs we were already well sated after a good breakfast, so it was the flowers that drew my attention. Realizing I couldn't purchase a bouquet, the vendor tucked a vivid pink chrysanthemum in my handlebar bag, where it remained to brighten the remainder of my day! 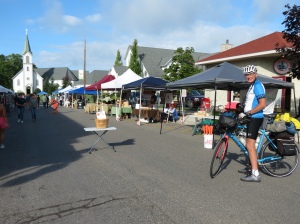 On a smaller scale, roadside stalls are just as fruitful. Along with the usual assortment of farm stands and orchard sales, I discovered another variety. Coasting through the town of Empire looking for a good resting stop, I spied a tent in a front yard. Closer inspection revealed a treasure trove of home baked goodies. It was tough to make a selection, but that lemon ginger scone was a winner. 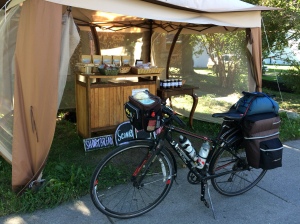 Taking it one step smaller, we aren't immune from picking directly from Mother Nature. Apples were in abundance throughout the area, and we claimed a few that grew right on the bike trail. Attempts to scavenge crab apples were less successful, as Rich learned through several mouth puckering attempts. 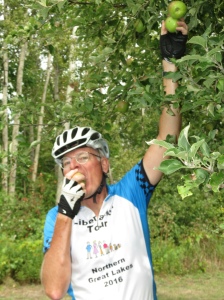 Some folks simply cater directly to passing cyclists. We particularly appreciated these two humanitarian services, which need no further explanation. 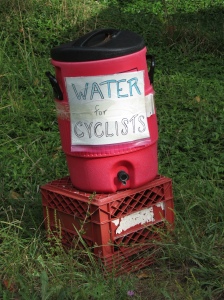 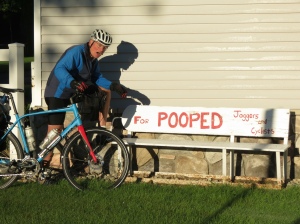 We thought we'd seen it all until we reached the Straits of Mackinac. There we stumbled on the annual Truck Show. With Main Street in St. Ignace lined with hundreds of semis, we could ogle the macho machines as we cycled. But that was only the beginning. Around 9:30 that evening, those same behemoths thundered past our motel, on their way to drive over the Mackinac Bridge. Multi-note air horns blaring, engines revving and decked out in garish colored lights, they roared by one after another, and another and another… And naturally we were out there to witness this astonishing display of Americana. Just another roadside delight. 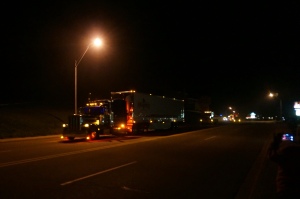