Cycling the western coast of Michigan's lower peninsula was scenic, populated, and let's face it, wealthy. Pristine villages with tidy homes, stately mansions and manicured gardens. The better the view, the bigger the homes. In between, the shores of Lake Michigan were dotted with lake places. From small cottages owned by generations to large new log homes with soaring windows.

One of my favorite areas was cycling through the “Tunnel of Trees” on the last bump before reaching Mackinaw City. The road was narrow and lacked not only shoulders but a center line. Traffic was light and we had almost constant views of the lake and towering trees overhead. A cyclist's haven.

Once we crossed the Straits of Mackinac, all that changed. Here in the UP, wilderness prevails. Population has dropped dramatically. We can cycle for miles and miles with no towns, no services and few cars. Traveling the upper shore of Lake Huron, all was quiet. A stop in Hessel took us to a small marina. We were in the region known as Les Cheneaux, for the narrow channels between the cluster of offshore islands.

Camping at nearby Loon Point Campground allowed us to enjoy these new environs and the peaceful lakeshore. 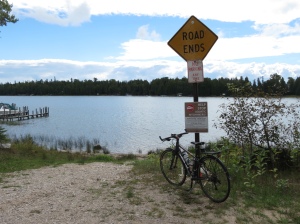 Our next destination was Drummond Island. That stretch of cycling afforded us more views of the lake and we were surprised to find that even where there was open water, the shoreline still harbored marshy wetlands. Perfect area for attracting birds and wildlife. And cyclists like us.

Drummond Island is home to only about 1,000 full time residents, which swells to nearly double that number in the summer. Unlike other northern islands, their ferry runs year round. Its hourly trips and the current of the St. Mary's River keep the passage open. It is a beautifully wooded island, with limited roads and only one small village. But its residents are fiercely loyal and love it there. Established in a modest room right on the water, we were perfectly situated to sit out the showers that broke out in the afternoon, and enjoy the faint rainbow afterwards.

Rich even caught the Northern Lights that night just outside our room. That's how you know you are in a remote spot. Firmly entrenched in the Upper Peninsula. 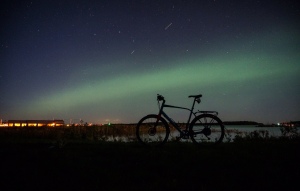 1 thought on “From Lower to Upper Peninsula”