The essence of Door County. Can it be done in a day? On a bike, no less? We're trying.

Cycling up to Egg Harbor was quiet and tranquil. The coastal road wound through woods that hosted lakeshore homes, occasionally giving us a peak at the water. Such would be the case all over the peninsula. A sign warning of road construction hinted at trouble but instead delivered 6 miles of fresh smooth pavement. It felt like a personal bike path.

Luck followed us to our motel, triggering a rainfall after our arrival and producing a full rainbow at its completion. A colorful sunset over the harbor followed. It was a nice welcome to Door County. 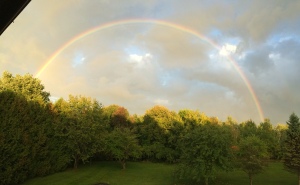 We are here for two nights, allowing a full day of cycling without gear. Well positioned to explore the upper ranges of Door County. We can each do as we please, and so we divide and conquer.

Rich chooses an early morning foray into Peninsula State Park for birding. He leaves at sunrise and cycles the full circuit of Shore Road. The park is deserted at that early hour, and he finds success at locating birds. 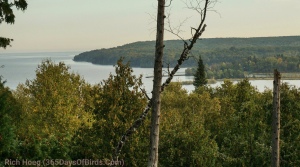 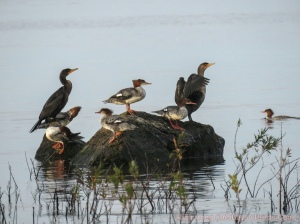 Jim and I join forces for the day. We are eager to explore the northern end of Door County. Jim is scoping things out for a potential future trip for Bike Tour Vacations. I just want to see it all. We set off shortly after Rich.

Our plan calls for covering a lot of miles – 56 in total – which translates to sightseeing while on the move. What we sacrifice by not stopping to linger anywhere for long, we gain in distance. We leave plenty for future exploration, and come away with visual memories of sights along our route.

The western coast is punctuated with picturesque towns. Every five miles or so we can gaze at the harbors, admire the personality of the town, take in the plethora of shops and restaurants. Opportunities abound for outdoor activities both on and off the water, for those with the time to spare. There are plenty of visitors, but not enough to interfere with our cycling. In between we travel quiet lanes near the water. I decide that my favorite spot is Fish Creek, for its small town feel and pretty harbor views. 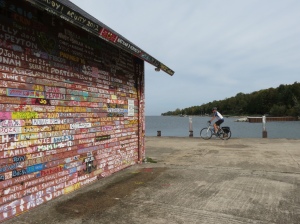 Crossing over to the opposite coast, the population suddenly drops. We are now in the countryside. Farmland is common, and we feel as though we are out where the real residents live. The towns are quieter and more humble. But no less appealing. 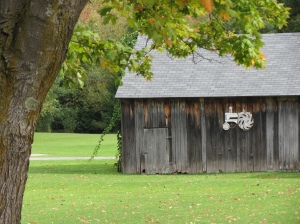 The day is cloudy but warm, amazing to be able to cycle in shorts and jersey in October. It is great to be on a bicycle. The perfect day to visit an orchard. My crisp, fresh apple tastes like fall.

The biggest success of the day is the carefree cycling. We have a bicycle map that shows the best roads to use, but honestly, all the secondary roads have low traffic and mostly good pavement. Distances are not great, making sights and towns easily accessible when pedaling. And there is so much to see and do along the way.

Door County in a nutshell. We definitely captured the essence of the peninsula. Now I'm ready to return to savor the full flavor some day.

1 thought on “Door County in a Nutshell”