Sometimes you just have to go out of your way for a good thing. Even if it means extra miles and lots of hills. We could have stayed in a humdrum motel in Lake Fraser, but instead Rich found the Stellako Lodge. The only catch was straying off the highway for an extra 8 mile stretch each way.

Turning down the local road was instant relief from the busy highway. Rolling down the well paved byway we practically owned the road, luxuriating in its quiet width with only the occasional need to give way to a car. Typical of small roads it followed the contours of the land, which in this case meant going up and over a major hill between the highway and the resort. But the sunny afternoon and woodsy surroundings mitigated the pain.

Stellako Lodge proved to be as picturesque as its website photos. A rainbow of bountiful flowers with well kept cabins told us we were in the right place, and soon Trudy was checking us into the cabin “with the best view.” Indeed, we were right on the shore of Francois Lake. 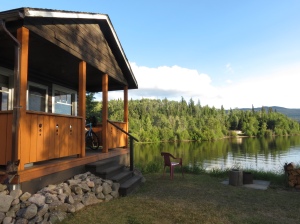 Our early start to the day paid off, giving us several hours to relax by the lake. As the afternoon wore on, the wind dropped leaving the lake still and peaceful. Situated next to the outlet, we could also hear the rush of the water flowing rapidly into the Stellako River. It was lovely white noise. The lack of internet also contributed to the quality of our downtime.

Finding dinner required little effort. A short stroll took us to the lodge dining room overlooking the lake. As in most mom and pop resorts, Trudy and her husband were cook and server, and their Swiss roots were reflected in the menu. Rich immediately went for the schnitzel while I savored the prawns in curry sauce. We strongly suspected that they lavished us with extra side dishes knowing that we had cycled our way there.

The low sunlight was warm and inviting on the bridge over the river after dinner. We lingered and watched the fish that were hanging in the current waiting for dinner to come their way. Our final hours were spent appreciating the view from our cabin.

Morning brought clouds and a short shower soon after we started cycling. We took a different route back to the Yellowhead Highway, but inevitably it too was hilly. And we'd been warned. Almost immediately after leaving the resort we encountered the first hill – a 12% grade. It was followed by a second such climb. I'm proud to say that I conquered them both! The payoff was coasting downhill nearly all the rest of the way back to the highway. 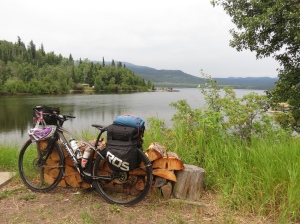 The resort was a lovely oasis away from the busy highway. And far more memorable than a motel. Yes, it was definitely worth the extra effort.