The sign says it all. Our last 218 miles to the coast are wilderness. Period. I thought our travels were remote for the first portion of our trip. But the last three days have pushed beyond those boundaries.

Besides leaving civilization behind, we have also lost most of the traffic on the highway. The bulk of the vehicles likely turned north to Alaska. Better yet, we have had smooth wide shoulders. Cycling doesn’t get much better than this.

Towns may in short supply, but scenery is not. We spent one whole day chasing the Seven Sisters peaks. When we first saw them from the train they were shrouded in mist, and only a few of the gals were visible. The conductor told us that it was rare to to have a day clear enough to see all seven peaks at once. This time we had one of those days. Anxious to get a good picture, I constantly scanned the horizon seeking a photogenic view. When the peaks loomed high in the distance, ugly power lines always marred the image. As I moved on, the sisters invariably sank behind the trees. The road twisted frequently and the peaks kept reappearing in new directions, only to repeat their disappearing performance. The next day when we entered the Seven Sisters Provincial Park, I finally got my photo.

In New Hazelton we joined up with the Skeena River. This wide, fast flowing river is one of the longest undammed rivers in the world. It has become our constant companion, and our “ticket to the sea” as Rich puts it. If not for the river, we would not be doing this. By virtue of the river cutting a swath through the mountains and the Yellowhead Highway following it’s path, we have been granted a very reasonable route to the sea. I was skeptical before we came. But I can now attest to cycling right through the mountains with minimal climbing.

Numerous side rivers and creeks flow into the Skeena, adding to its volume and providing pretty views.

Our accommodations on this stretch have required imagination. I have Rich to thank for finding some gems. We spent a quiet night in a municipal campground, followed by staying in a treehouse on a farm. Tonight we have a room at Kasik’s Wilderness Lodge. It is the only stopping point in the final 94 miles, which we deemed too far to conquer in a single day. The folks at Kasik’s are have gone out of their way to take care of us. Tonight June prepared a hearty pasta dinner and served up a tasty apple bread pudding a la mode just for us. 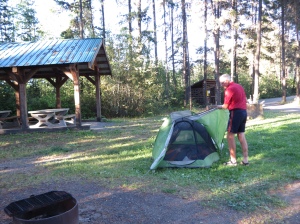 The biggest surprise of this whole trip has been the weather. We packed for cold and rain, and instead we landed in the midst of a heatwave. Each morning starts out brisk and clear at 50 degrees. As the sun climbs over the mountains the temperature soars, reaching the high 80s by mid-afternoon. To compensate, we start cycling before 7:00 each morning to finish before the height of the heat. The payoff is having consistently blue skies as the backdrop for the wilderness.

Tomorrow is our final push to the coast. We already know that will bring cooler temperatures and greater chances of rain. But we can hardly complain. We have had wilderness cycling at its best.