Prince Edward Island, or PEI as it is commonly called, wasn't even on our original itinerary. But it has been a most worthwhile addition. First, it is quite flat. That makes Rich really, really happy. And I can't say I mind. With a population of only about 145,000 on the whole island, it has a quiet and uncrowded feel. There aren't even many tourists. It's extremely rural, with beautiful pastoral farm scenery inland and frequent water views when cycling near the coast. Every mile we bike provides us with an eyeful.

I came on this trip looking for coastline, cliffs and lighthouses. PEI has delivered on all accounts. Let's start with the harbor towns. With an active fishing industry, there is no shortage of picturesque inlets filled with boats. These are some of my favorite views. I love the colorful display of the working boats, often right alongside the splendor of pleasure craft. Even the worn working sheds on the edge of the harbor exude a certain rough charm.

Boats in the evening light in Montague

As for coastline, PEI offers something for everyone. I found my cliffs on the north side of the island. As promised, they were a definite red color, due to the iron oxide that coats the sandstone surfaces there. They showed up in sharp contrast with the blue of the water. Surprisingly, tall undulating sand dunes and long stretches of fine sand beach can be found in the same area. All of this resides within Prince Edward Island National Park, which quickly earned a spot on our “best of” list.

Molly and cliffs in the National Park 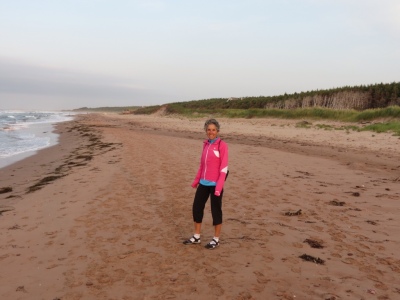 Walking the beach in the National Park

One of the first sights we visited on the island was Cape Bear Lighthouse. We learned that it was the first land station to receive the distress call for the Titanic. I loved finding it at the end of a quiet lane, unassuming and tucked away from view until we rounded the corner. We soon found that its signature white and red decor was repeated many times around the island. 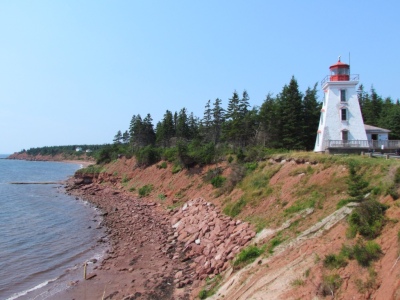 Walking the beach in the National Park 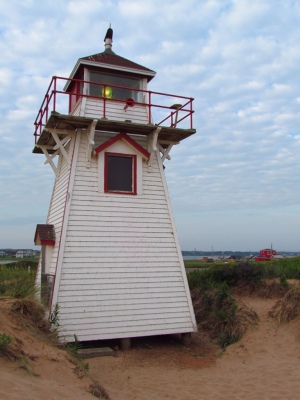 As a bonus, we enjoyed a number of beautiful sunrises and sunsets around the island. What's not to love about that?

Montague harbor as we cycled away in the early morning light 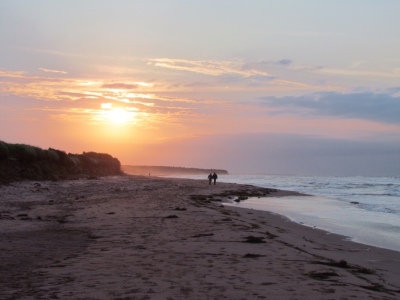 Sunset at Stanhope Beach in the Park