Little did we know when we set out to cycle on Prince Edward Island, that an extensive trail system for cyclists was awaiting us. The demise of the railroad on PEI in 1989 presented the opportunity to establish what is now 357 kilometers of bike trail along the abandoned rail beds. Known as the Confederation Trail, it stretches across the entire island and is still growing as new offshoots continue to be added. We covered only a small portion of the trail, but relished every mile (ah, make that kilometer – we are in Canada, after all).

The obvious advantage of the cycling trail is the lack of cars. Although traffic is light on PEI, it's still a danger. And traveling on a dedicated path is so much quieter and more relaxing. In fact, we saw few other cyclists on the trail – it was like having our own private route through the countryside. It does come at a price, however. The trails are not paved, and the surface ranged from hard packed dirt to soft shifty crushed rock to grassy in the lesser used patches. I find it a lot harder going on these surfaces than the paved roads. But apart from having to swallow my pride as I fell behind Rich on the trail, it was well worth the extra effort.

Each intersection with a road involves a gate across the path on either side. I understand the logic of leaving the gates only partially open, to discourage non-bicycles from using the trail. However, it leaves the cyclist with the challenge of frequently navigating these narrow sideways openings. Rich calls it the ancient art of gate threading. Eventually I got the hang of it, going through without stopping!

Since the trail travels through the center of the island, it precludes following the coastline. So we did venture away from the trail when we needed our fix of water and harbor views. And in some inland areas not serviced by the trail, we followed local roads from town to town. It didn't take long to discover that PEI is not exactly as flat as we thought, as we found ourselves grinding up tough uphills! We soon leaned to use the trail whenever possible. In addition to its gentler grade, it also sheltered us from sun and wind. A big advantage.

Perhaps it wasn't entirely kosher, but we did enjoy the fruits of the trail as well – literally. One fine morning we feasted of crisp fresh apples and an abundance of blackberries as we passed through one well endowed section of the trail. Oh yum!

PEI National Park offers another 50 kilometers of cycling trail. This is a paved trail that hugs the northern coast in the park. Cycling that portion soon became one of my favorite experiences of our whole trip so far. With continual views of cliffs, dunes and sandy shore, it was a feast for the eyes as we breezed along. 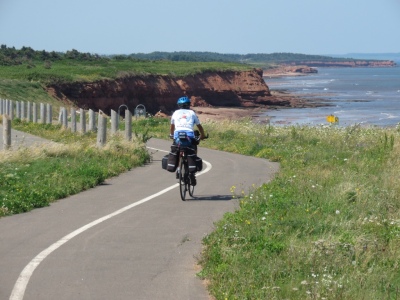 Rich and other touring cyclists

Not surprisingly, PEI's trails attract touring cyclists. While camping at the National Park, we happened upon a woman from the Netherlands and a couple from Ottawa traveling by bicycle. Having all headed to the little fish and chips shack down the road, we shared a small outdoor table for dinner and compared notes on our travels. We loved hearing their adventures, strategies and approach to cycle touring. And we all agreed, PEI is a great place to do it.

3 thoughts on “PEI – A Haven for Cyclists”