One of the greatest things about this trip is that we never know what interesting experience awaits us each day.

This day started out ordinary enough. In fact, I was finding it a particularly blasé ride. With a wind in our faces, a chill in the air and not much scenery to distract me, it was one of those days that felt like it's sole purpose was to get from Point A to Point B. Some days are like that. Not every mile can be spectacular.

The good news is that the sun was shining, and as it warmed the air it also thawed my attitude. And there were a few bright spots along the way, which Rich captured nicely. 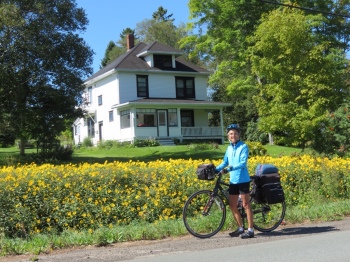 In our usual struggle to find food, some locals directed us to La Source restaurant up ahead in Charlo. It was a bit off the beaten track, so we were thrilled when we found it. The meal was as good as promised, but it delivered much, much more. Striking up a conversation with the owner, Guy Lavoilette, we learned that we shared common interest in Nordic skiing, including skiing the American Birkebeiner. Guy asked if we had time to come out and see the local Nordic ski venue. With an eager Yes! we were soon heading off into the woods in his van.

We soon learned that this is no ordinary ski club. While it does serve the community, it is also a world-class training center for not only Nordic skiing but also biathlon. And it soon became apparent that Guy is an active leader in the Canadian National Nordic Ski program. We were wowed by the facilities and left more than a little envious.

Guy and Rich at the Charlo XC trail map 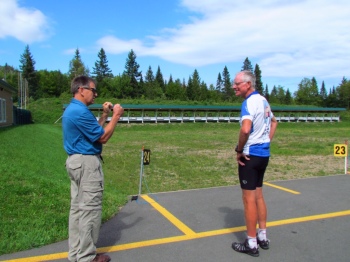 Guy and Rich at the Biathlon range

Energized by our unexpected detour, we made a final surge to the end of New Brunswick. We couldn't keep our eyes off the hills of the Gaspé Peninsula across the bay, yet our cameras could not capture how imposing they appeared. After all these days of cycling, it was exciting to cross the bridge into Quebec Province. Somehow we felt like we'd finally arrived. 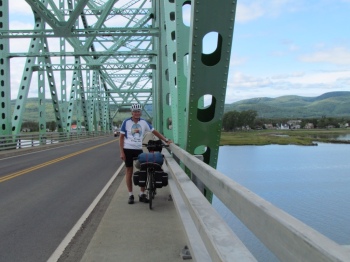 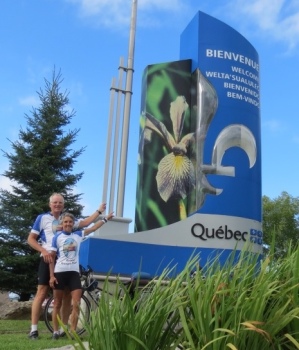 For a day that seemed to start out on the wrong foot, it decidedly took a turn for the better. Just when I least expected it, adventure came our way.