When we stopped at the Information Booth upon entering Quebec, the woman added us to list of visitors and asked how long we'd be there. We looked at each other and shrugged. She seemed a bit mystified, but even after she told us the mileage around the Gaspé Peninsula we still didn't know how long it would take us. We finally told her two weeks and let it go at that. We're far enough into this trip now that days are blurring together and time seems unimportant. It's a great feeling!

We also leaned a new term: Gaspésie. It refers to the whole Gaspé Peninsula. I rather like the snappy shorthand for where we are.

Like most of the other areas we've cycled through, we are following the coastal road. Many times in the past it seemed a stretch to show the road alongside the water, when there were few views along the way. And in Maine, the coastline was so ragged that we rarely got all the way out to the ocean's edge. But here in Gaspésie we have truly been right near the water for two days straight. We've gotten an eyeful of Chaleur Bay with its capes and inlets, and now it is widening out into the Gulf of St. Lawrence.

To the other side, the land rises into steep, forested hills. Their constant presence is a reminder of the hilly interior of the peninsula. It is a beautiful backdrop to the water scenes and the coastal towns. Along the bay there is a buffer of flat land between the water and the hills. We've been enjoying that mild terrain and the carefree cycling it has afforded us. Blessed with clear sunny days, it has made for extremely pleasant travel. 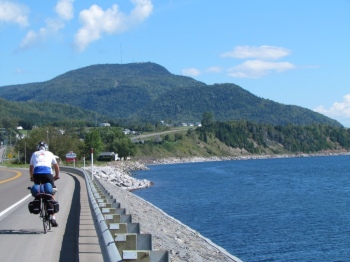 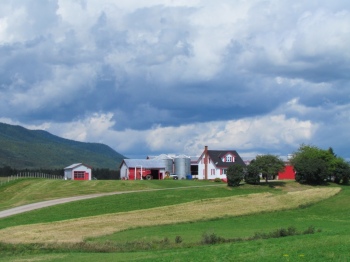 We had the good fortune to stay in a Warm Showers host home right on Chaleur Bay. Rising early, we caught a nice sunrise over the bay right from their yard. We were pleased to get in a few hours of cycling before the ever-present winds started up. Not only was it smooth riding, but the reflections in the calm waters were a rare treat.

Not all of our favorite sights involve natural beauty. Sometimes a little humor and creative spirit goes a long way to entertain a couple of weary cyclists. Such was the case in New Carlisle. There we found a vast collection of uniquely painted fire hydrants to tickle our fancy. They even had one of our dear dog, Spot! Our progress through town was severely hindered by the need for frequent photo stops, but neither of us minded. 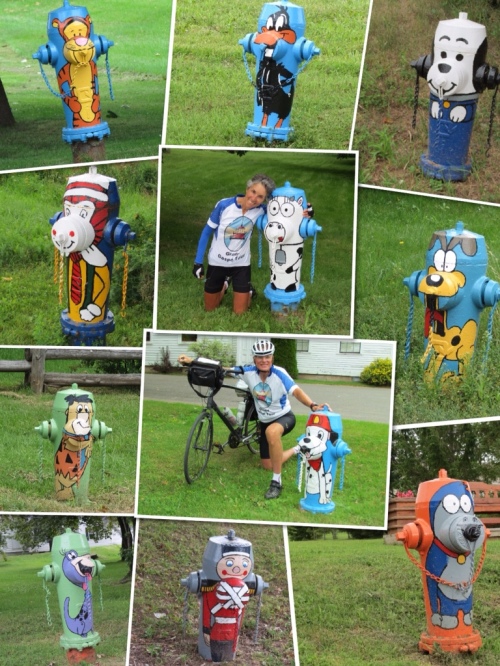 Having reached the end of the bay, it would appear that we have also run out of mild terrain. We have had a few stretches of rolling hills to get us warmed up. And today we finished up with one serious climb. From the looks of the incline leading out of town in the morning, we are heading straight into the hills. Gaspésie is about to show us her true colors. The honeymoon is over. I sure hope we're ready.