With the end in sight, and not wanting the adventure to be over, one way to delay the inevitable was to slow down our progress. Since there was some rain in the forecast, we could also justify our shorter distances in order to beat the showers. And in fact it did rain later in the afternoon two days in a row, well after we were snugly ensconced in our accommodations.

Adopting a leisurely pace, we didn't rush as we continued along the Connecticut River, still. We stayed in a lovely Warm Showers home that was once an old parsonage and backed up right to the river. There we happily wiled away a good portion of the afternoon with Paula and Tom, relaxing on their porch solving the problems of the world. Paula pampered us with a delicious dinner featuring fresh local produce, and accompanied by a red wine that went down oh so nicely. We were so comfortable, it was easy to linger in the morning before moving on for the day.

The site of amazing coincidences, in front of the coffeehouse in Hanover

Since Rich went to Dartmouth, it was a natural to spend some time in Hanover, New Hampshire to visit campus. Somewhat of a local celebrity, Rich enjoyed being interviewed by one of the students about our trip for the college newspaper blog. It was in Hanover that we had some amazing coincidences. Standing outside the favorite local coffeehouse, we ran into one of Rich's classmates. Not only that, but he was also a member the rowing team with Rich. While they were reminiscing, a young woman approached us and said, “Excuse me, I think I last saw you on the end of the Gaspé Peninsula.” Sure enough, we both remembered well talking to her, a fellow long distance cyclist. She was traveling in the opposite direction laden with gear having ridden all that way from Vancouver. What a surprise to run into her again in a totally unrelated place! 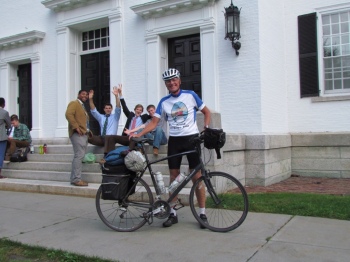 Rich and some current students on the Dartmouth campus

With just about 100 miles to go, there are no obvious detours to take without climbing into the mountains. And we've done enough steep hill climbing for one trip, thank you. So even though I find the 60-mile days more satisfying, I'm willing to slow things down to prolong the trip. The end is coming soon enough.

1 thought on “Slowing Things Down”