It was time to make our way across New Hampshire. Having successfully travelled south through the river valleys, we now had to get over to the sea coast. The hurdles facing us were Appalachian Mountain ridges in the western half of the state. The solution? The Northern Rail Trail. It offered us 50+ miles of abandoned railroad bed converted to a multi-use trail. And by definition, the inclines were long and very gradual. Barely perceptible, really. It sounded wonderful.

Indeed, the trail provided protected cycling away from traffic, noise, turns and the need for directions. All we had to do was follow the trail, mile after mile. It followed a beautiful wooded course, over streams and rivers, and sometimes along a lake. Leaves were beginning to turn color, and especially near water we were treated to an infusion of brilliance. It definitely felt like fall. 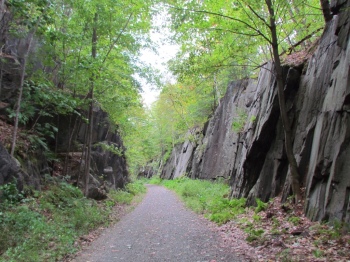 Normally on training rides I love the feel of the trail. When the sights are irrelevant or I'm traversing ground I've covered countless times before, I appreciate being able to just cycle through nice countryside. But I've discovered that they don't have the same appeal as part of a cycling trip. While the scenery is pretty, I feel like it is shielding me from the towns and other real sights beyond the trees. And long before 50 miles pass, I'm interested in seeing a little something else.

Before I malign the Northern Rail Trail unjustly, however, I will admit that this trail did have a few scenic sights of its own. At Potter Place, we found an old railway station and a well-kept caboose. It provided a nice diversion and a good spot for a picnic lunch before resuming our ride.

In one area, the locals had populated the trail with stuffed characters at various intervals, a nice break from the solitude of the trail.

And we did see a covered bridge. 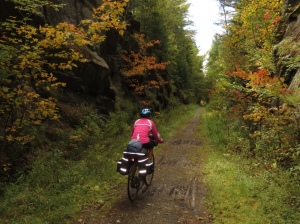 As long as I'm airing my gripes, I must add that trails usually lack the smooth fast pavement of roads. And that translates to slower progress. I readily admit that we knew ahead of time that this was not a paved trail. We were fully prepared for a crushed limestone type surface. And that's how it started out. It just didn't stay that way. It degenerated into little more than a footpath at times. Or divided itself into two ruts, like a lesser used dirt road. And occasionally it was muddy. It turned out to be one of our longer days of cycling, with the extra time required to navigate the terrain. 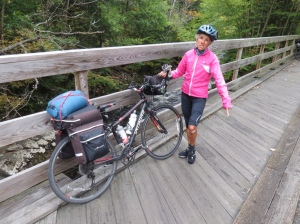 And then there were the bridges. That's what did me in. The diagonal boards were uneven and seemed to bounce as my tires rolled over them. Down the middle was another set of boards on top, narrowing the path into two sections. I managed to get thrown off balance on one approach, wobble across my half of the bridge deck and ricochet off the center strip. Wham! Bang! Down I went before I could extricate a single foot from my pedals, and lay strewn across the bridge still attached to my bike. Fortunately, I suffered only a few bruises and stripped all the recently healed skin off my knee. My first fall of the trip, so close to the end, damaged my psyche more than my body. I approached every bridge hence with a wary eye and a tense grip.

Fortunately, after 26 miles the trail widened and flattened out into a well disciplined path for the remainder of its length. The slow steady climb we'd been doing reversed itself into an equally gradual descent. And even the bridges improved. My mood followed suit. Although sometimes I think I'd rather just deal with the cars.