Perhaps the first indication that this was not going to be a normal day of cycling was the roadblock. Cows. Right in the middle of the trail. They looked friendly enough, but did not seemed inclined to budge. They meandered, munched, and checked us out. Rich finally ventured forward but that didn’t even faze them. They ran ahead of us and eventually exited the trail to return to their field, graciously allowing us to pass.

The second clue was hearing my phone ring, which was unusual. It was our friends Carl and Connie from the Twin Cities. They were camping at Lake of the Ozarks and were already en route to the Katy Trail with their bikes. Where were we, and could we meet up? To be fair, it wasn’t 100% out of the blue. We had traded Facebook comments about being close by. Soon we had plans to cycle toward each other.

Cycling on from Booneville we encountered the only railway tunnel on the trail just before Rochport. There were loads of people out walking, which was a surprise as until that point we’d seen few people at all on the trail. It became apparent why they’d chosen that area as it was very scenic. Not far beyond, the bluffs rose well above the trees and we heard a bunch of geese making an awful racket. They were nesting in the crevices on the face of the bluff. 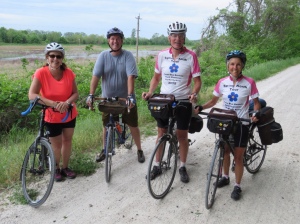 Shortly after that we saw familiar faces approaching. Sure enough, it was Carl and Connie. They turned around and cycled with us for a good distance. Cycling two by two down the trail, we had a great time catching up on each other’s vacations while the miles quickly slipped by. Searching for a café for lunch turned out to be an exercise in frustration (and hunger) as Wednesday just happened to be the closing day in that area. So when we saw the sign for Chim’s Thai Kitchen, we had low expectations. Discovering that the lowly trailer business was indeed open, we were all in. The fact that Rich does not care for Thai food was irrelevant. Despite some language difficulties and a strong-willed proprietress, we managed to place our orders. To our amazement, the food was very good. Even Rich agreed. I have witnesses, and will remind him next time I want to go out for Thai.

With farewells to the Minnesota folks, we headed for North Jefferson City. There we made new friends when we were picked up by Kent, who is the brother of our friends on Duluth. Having heard about our cycling tour, he and his wife Marna kindly offered to host us for a night. Kent ferried us to their home in Fulton, passing the spot where Winston Churchhill made his Iron Curtain speech. We had a lovely visit with them, trading travel stories and desires for future destinations. We hope they will make a trip to Duluth soon. 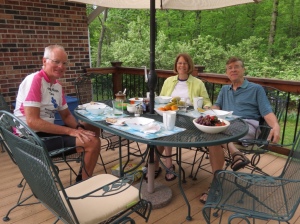 Breaking out of the mold of just cycling as a duo with only each other for company was refreshing. Who knew we had friends on the Katy Trail?

1 thought on “Friends on the Katy Trail”