With all the cycle touring we have done to date, we have our daily routine down pat. Up early, cycle 20 miles or so, stop for breakfast, and finish about 50 miles by mid-afternoon. When weather permits, and the opportunity arises, an ice cream break is always welcome. Detours are kept to a minimum and touristy stops are limited. It works for us. At least in the US and Canada.

This trip is our first foray into cycling abroad, and Scotland has imposed new cultural norms that play havoc with our normal mode of operation.

For starters, forget getting on the road early. Every lodging except hostels includes breakfast as part of the package. Not just coffee and rolls, a full cooked breakfast. If we're lucky, they might start serving at 7:30. 8:00 or 8:30 is more the norm. We're too economical to skip out on something that we've paid for, so morning relaxation has been imposed. And the meal is hearty enough to prevent rushing. Funny, but every day it gets easier to linger our way into the start of the day. 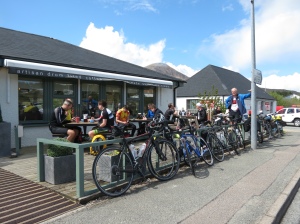 We do miss our morning breakfast break, though. Now that we have returned to more populated areas of Scotland, we are able to substitute a coffee shop stop instead. It turns out we are not the only cyclists who fancy a caffeine break. On Skye, we coasted up to a local coffee shop to find it overrun with cyclists – many of whom we had seen the day before on our ferry. The choice of venue was obvious. It was the perfect morning for sitting outside in the sun.

Setting off later means finishing later in the day as well. We found it put a time crunch in our evening, and robbed us of time for blogging and relaxing. But like everything there is a remedy. Just don't cycle as far. To be fair, there is a more significant factor at play here. Hills. Lots of them. There is a reason this is called the Highlands. All that climbing takes a lot of extra effort, not to mention taking its toll on our speed. So we figure each mile cycled equates to something more than a normal mile. The same math applies to headwinds as well. We have lots of ways we can rationalize adjusting our average to around 38 miles a day. 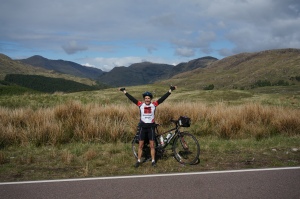 While we are at it, we have loosened our standards on the tourist thing. After all, what's the point of being in Scotland if we don't take time to see some of the sights? Our last day on Skye had us staying right near the Clan Donald Skye Centre. Having reached our destination by early afternoon, we abandoned our bikes and took in the full extent of its offerings.

The museum covered the clan system in Scotland, as well as tracing the Donald Clan. But it was really the grounds that we enjoyed the most. The MacDonalds had been frequenting a manor house there since the 1650s. It was only in 1815 that it was extended to form Armadale Castle, and was used by the MacDonalds up until 1925. Left to the elements, it has fallen in disrepair, with trees and flowering bushes now inhabiting its exposed interior.

The extensive gardens include several woodland walks. Following the red trail, we discovered that spring had taken firm hold and the woods were carpeted with bluebells and white flowering garlic. It brought back memories of the blue bonnets in Texas on last year's cycling tour.

Throughout the formal gardens the rhododendron were in bloom. They came in all colors and sizes, including huge flowering trees.

Two hours passed quickly. Two hours that we could have been cycling. But with our new cycling rhythm, it was perfectly acceptable to while away those hours instead.

1 thought on “A New Cycling Rhythm”