It's a time honored battle. Rich wants to take it easy. I want to press on for more miles. I've made peace with our reduced mileage this trip, so it surprised me when Rich planned to cycle through the Great Glen in two days. The total distance looked to be about 110 miles. By car. It's always more on the cycle route.

We've learned on previous trips that the best way through the mountains is to follow water. Stay in the valley to avoid hills. Since the Great Glen route follows a series of lochs and canals from Oban to Inverness, we figured it would be reasonably flat cycling. It was. For the most part. But as we'd been warned, there was one major climb.

When you factor in three ferries, additional cycling miles, a big climb and some strong headwinds, we got more than we bargained for. They were the two longest days of cycling on our whole trip. And yet, there were plenty of compensating benefits.

We always enjoy riding along water. This was unique in that we followed a series of inland waterways for 123 miles. The initial portion along Loch Lonnhe still felt like sea coast. And it had sights to go with it.

We almost missed Castle Stalker, a sea castle just offshore from our cycle path. Good thIng Rich looked left and noticed it! There has been a castle on this site since 1320, and this structure dates back to 1450.

A series of canals connect the lochs in the Great Glen. And with canals come another kind of locks. The first we came to was on the Caledonian Canal just north of Fort William. Called Neptune's Staircase, it is a series of eight locks and is the longest staircase lock in Britain. It lifts or lowers boats 64 feet. It was well past dinner time when we cycled by, so there was no lingering to take pictures. But I did snap a quick one of the boats just above the first lock.

Other locks were simpler affairs, but no less interesting. We never got to see a boat going through, but one lock operator did ask if we'd like a cup of tea! I still regret that we didn't take him up on the offer. I'm certain he had some great stories to tell. 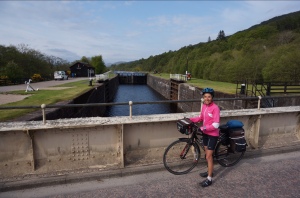 For Rich, the main attraction was getting to see Loch Ness. It was the final loch in this stretch and at 23 miles long there was plenty of time to look for Nessie. We traveled up the eastern side of the loch, avoiding the busy highway on the opposite side. We knew that initially the road veered inland, which meant navigating the steep hillsides. It was as long and challenging as promised, and by the time we reached the high point we discovered that we were several mountain ridges away from the Great Glen. It seemed odd that the lochs we could see from there did not include Loch Ness. 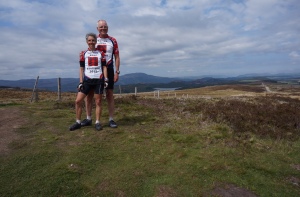 The journey back down eventually returned to Loch Ness and took us to the water's edge. We appreciated the flatter terrain and could see the famous Urquart Castle on the opposite shore. By that time, after two long days we were even more glad to reach Inverness.

In hindsight, it would have been wiser to take three days. But I have to say that I enjoyed the challenge. I relished each climb I completed, each mile I put behind me. I certainly got my exercise in the Great Glen. And even I got tired.

1 thought on “I get my exercise”