Before this trip, Yellowstone National Park conjured up images of Old Faithful in my brain.  Snow in June and a rustic cabin.  That’s what I remember from visiting with my family in sixth grade.  Now I realize the injustice of that narrow memory.

Yellowstone is home to a wealth of unique natural wonders.  Despite its vast size, the distinct variety of sights found within its borders is astonishing.  Each of our five days brought something new.  Thankfully, our son Erik and his wife Katie visited Yellowstone just a month ahead of us, leaving us with tips on the best way to see the park.  And their bear spray.

We explored the “Grand Canyon of the Yellowstone” – walking the north rim, hiking down to the brink of the Lower Falls and absorbing the rich colors of the deep canyon walls. 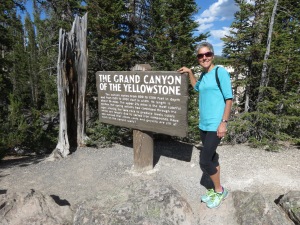 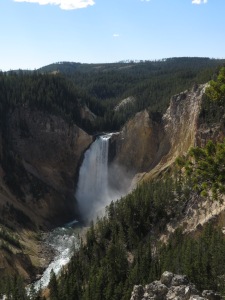 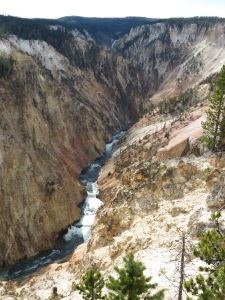 Naturally, we paid a visit to Old Faithful.  But there was so much more to that geyser and hot spring haven.  I walked the geyser trail, marveling at the huge variety in size, shape, frequency and reliability of eruption.  The hot springs were especially appealing, particularly the brilliant blue of Morning Glory. 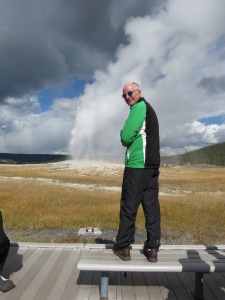 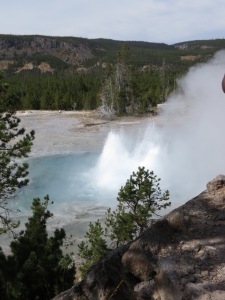 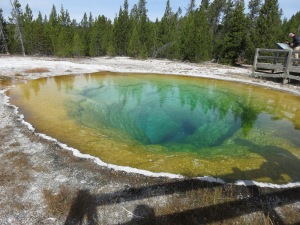 There was something magnetic about Grand Prismatic, especially when viewed from above at the overlook. 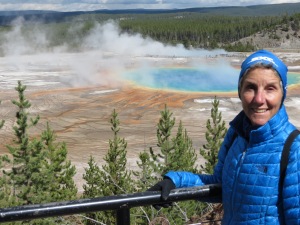 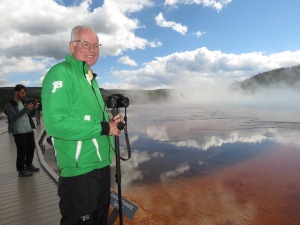 I wasn’t sure I needed to see Mammoth Hot Springs.  When we first arrived, I couldn’t see what was so great about them.  But after wandering among the terraces and land formations created by the hot springs, I had to admit I was impressed with nature’s artistry. 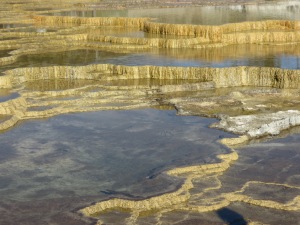 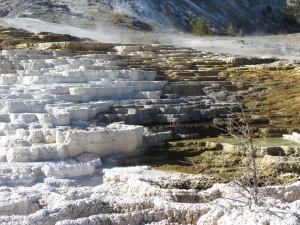 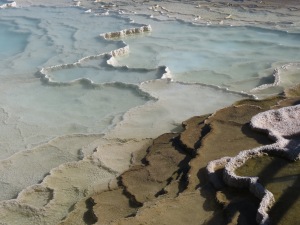 Even more than the famous sights, I was eager to get into the wilderness.  I wanted to hike down a trail, escape the crowds and lose myself in placing one foot in front of the other in quiet solitude.  Following Erik and Katie’s advice – and their footsteps – we hiked to Shoshone Lake, the largest backcountry lake in the lower 48 states. 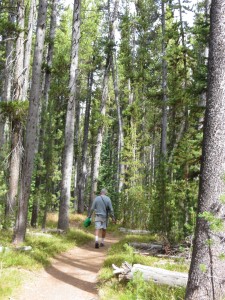 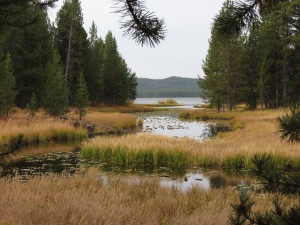 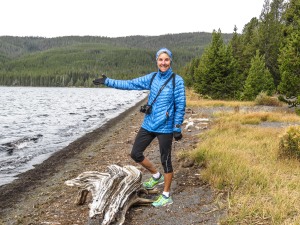 A visit to Yellowstone is synonymous with wildlife, and we saw our share of that as well.  Bison and elk were ubiquitous throughout the park.  I heard elk bugling in the woods for the first time.  Then it became commonplace, as it was rut season.  One evening, we were delayed getting to dinner due to a placid elk crossing our path.  A “wildlife jam” alerted us to the presence of two grizzly bears tearing into something tasty on the roadside.  We chose not to venture close enough to get a good picture of that scene. 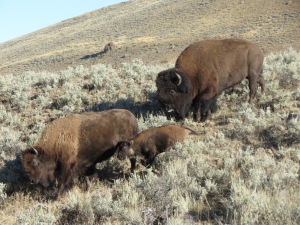 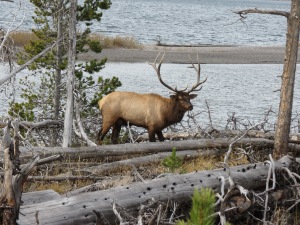 I have replaced my Old Faithful image of Yellowstone with a collage.  My mind now holds a collection of sights and creations of nature, interspersed with immersion in the wilderness and wildlife views.  Just a few of Yellowstone’s many faces.

Sometimes life intervenes.  Our revised plans to camp in our tent on our trip out west started out well enough.  We scored a nice campsite on the river in Teddy Roosevelt National Park, and managed to squeeze in a short bike ride on the wilderness loop after arriving.  A bison spent the night on the banks of the river just below our spot, and in the morning he took a stroll right through our campsite!  We decided to let him have it. 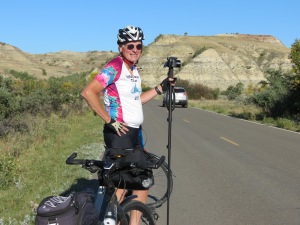 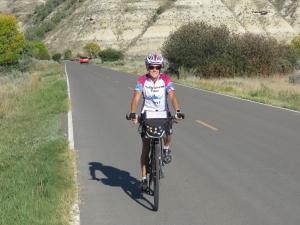 On good advice, we drove the Beartooth Highway to enter Yellowstone.  Getting an early start, we were well down the road and into the mountains just as the sun began hitting the peaks.  It only got better from there.  The 68 miles took us a full three hours to cover, slowly winding our way around hairpin curves, ogling the views over the edge and stopping frequently to take in the scenery.  We hadn’t even gotten to the park yet and we were already enamored with the locale. 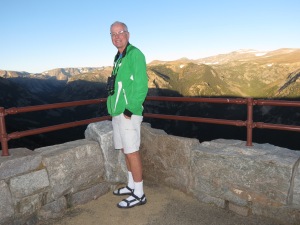 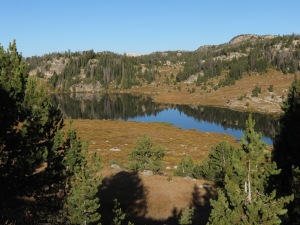 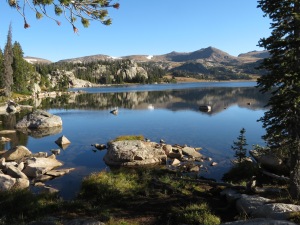 Traveling at the end of the season, we assumed that the crowds in Yellowstone had thinned.  But that wasn’t the case.  Even the campsites were still in high demand, so rather than moving around the park we snapped up four nights in the Canyon Valley campground, hastily making reservations en route.  Tall pine trees towered over our humble tent, needles carpeted the ground and plenty of space insulated us from other campers.  All seemed well.  But we only lasted two nights.

It wasn’t the thunder-snow that we heard rumbling and falling icily on our tent the first morning that drove us out.  In fact, we luxuriated in the excuse to hunker down reading in our cozy sleeping bags until it ceased.  It wasn’t the 25 degree temps the following morning.  It wasn’t even the meager camp meals that we concocted over our ancient sputtering cook-stove. 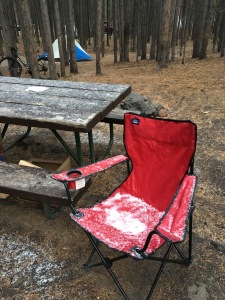 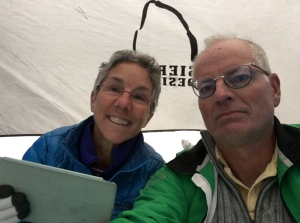 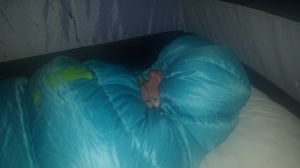 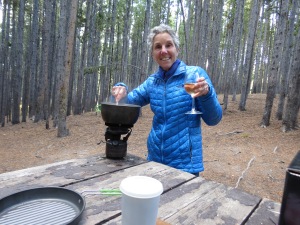 It was the bugs.  No, not the buzzing, biting, flying irritants that usually annoy campers.  Pink-eye and flu bugs.  Lingering gifts from a recent visit with our grandchildren took Rich down hard.  And each successive day he worsened.  No matter how cushy the air mattresses (and ours aren’t), there’s no pretending that we get a good night’s sleep on the ground.

Just as in bicycle touring, we instituted our trusty rule.  When someone gets sick, no more camping.  It’s the only way to get better.  But scuttling Plan B was not that easy.  Those late season crowds?  They filled the lodgings too.  After many phone calls, we scored a room in Grant Village that had just been released.  Wincing at the cost but celebrating our luck, we repeated the search in the Grand Tetons. 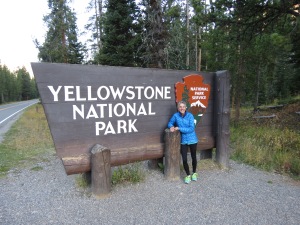 It seemed like a good idea at the time. In fact, it was.

We were off on an adventure. With a family wedding in Colorado at the end of September, we decided to use the preceding two weeks to drive out west and explore. Yellowstone and the Grand Tetons were on our list, but beyond that we had no real plan.

The unique element was traveling by campervan. We found a small start-up company in the Twin Cities that rents mini-van sized vehicles that seat two in the front and sleep two in the back. It would keep us out of the elements and provide a soft mattress for these aging bodies. It has a slide-out with one burner for cooking, spots for a water jug and a cooler, plus storage. Perfectly bare bones. It would give us the freedom to wander at will. 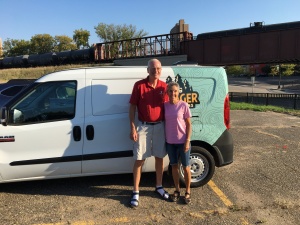 It seemed the perfect solution. We talked it up to all our friends. They too were intrigued. I rather liked the thought of sleeping in a tin can in bear country. An added layer of protection. Rich fancied the idea of sidling up to the fancy RVs in a Walmart parking lot one night, just for kicks.

All went smoothly as we transferred bags and gear from our car to the campervan. We found space for everything – just barely – and hung our bikes on the rack in back. Giddily climbing into the front seat we set off. 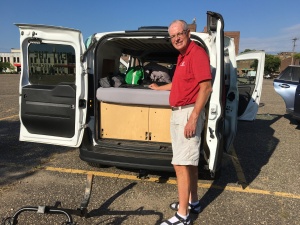 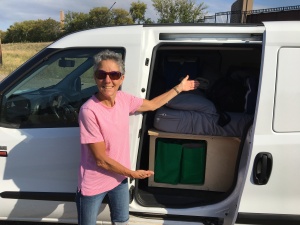 We were only three miles away, on the highway entrance ramp when it happened. The warning light went on and the engine heat soared into the red zone. Unwilling to drive it in that condition, we contacted the owner who arranged for his auto shop to take it right away. The 90-degree heat not only exacerbated the problem but singed our sagging spirits. Hot air blew through the open windows, cars sped by and the sun beat down relentlessly as we waited for the engine to cool. Only when it was well out of the danger zone would we putter down the road. Until it overheated again. This scenario repeated itself over and over again in the next two hours, just to get 12 miles.

The auto shop discovered an improperly connected coolant hose, and no coolant remaining in the system. No wonder it overheated. The van owner was there with fervent apologies and offers to help us pass the time during the repairs. Even in our misery, we felt for him.  It wasn’t his fault, he’d had the van serviced and inspected before he rented it to us.

But by then it was too late. Rich was spooked. A desperate conversation took place next to the van, in the stifling heat, sweating. Could we trust the van, after this issue? What if other trouble lurked? We were heading out to remote areas, thousands of miles from home. I struggled with letting go of our plans. Dropping the new experience just like that. But I have learned a thing or two in 35 years of marriage. I could tell that Rich would never relax in that van. It was time for Plan B.

Scratch the van. Retain the adventure. We would drive back to Duluth, pack up our tent, sleeping bags and camp stove and get a fresh start. Tomorrow.