The picture caught my eye right away.  Dad’s old photo album had a photo that he labeled “New Road to the Porcupine Mountains” dated 1936.  We traveled that same road this summer on our cycling trip.  What was just being built in Dad’s day is a mature road in mine. 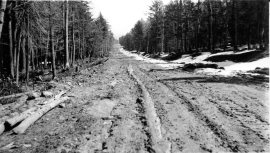 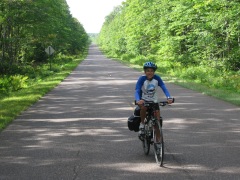 Soon my eyes were scanning other photos as I worked my way through the albums, looking for familiar sights.  It didn’t take long.  Dad went to college in Houghton, so I easily found another common location on the Keweenah Peninsula, the Eagle Harbor lighthouse.  He took his picture from the water, I took mine from land. 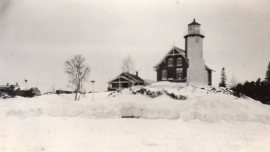 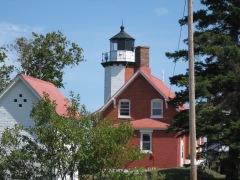 We both visited Copper Harbor, although Dad must have gone up Brockway Mountain Drive to get to the overlook for a broad sweeping view.  Since we were on bicycles, we declined the additional climb.  But I think it would have been worth it. 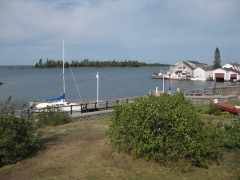 Another album brought a trip to the Canadian Rockies.  We too traveled there this summer.  Who can resist Lake Louise and the pretty hike along the lake to look back at the big chateau?  Apparently neither my dad nor I could. 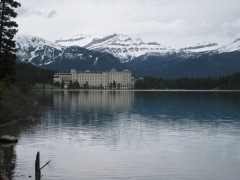 We had more than travels in common.  Dad loved to ski, and I discovered that he skied the trails as well as the slopes as a young man.  I too took to the trails in the UP last winter. 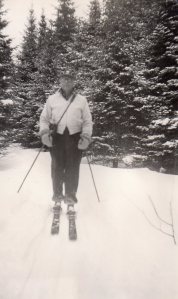 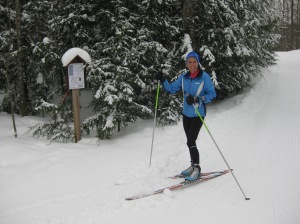 Dad and Mom enjoyed canoeing.  I don’t think they ever went to the Boundary Waters, like I did with my son Carl.  I think they preferred more sedate day trips.  And fashion wear. 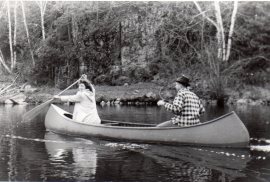 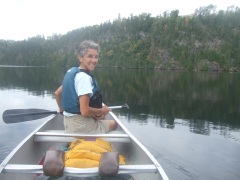 Some things are timeless.  It feels good to know that Dad and I chose the same places to visit.  We chose the same outdoor activities.  And we took the same pictures.  Lasting memories, then and now.

After spending a week in the Canadian Rockies with our son, Erik, we have compiled our list of Bests. As a point of reference, our focus was on hiking and the outdoors, which has a clear influence on our choice of categories.

We also compiled a few fun statistics from our trip:

There is very little that is second-best in the Canadian Rockies! 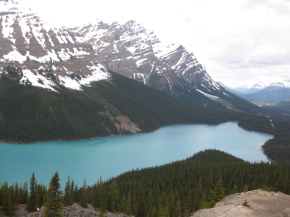 “It’s a scenic drive, not a transportation corridor.” So states the Parks Canada brochure of the Icefields Parkway. Perhaps that’s why the 140 mile route from Lake Louise to Jasper took us 10 hours. The scenery alone was cause for diversion, and there were plenty of turnouts and viewpoints to indulge our appetite for views of the surrounding mountains, rivers, lakes and woods. A favorite stop was the overlook at Peyto Lake. The deep hues of its blue green water contrasting with the snow capped mountains and a bit of luck with the sunlight provided us with an astounding sight. 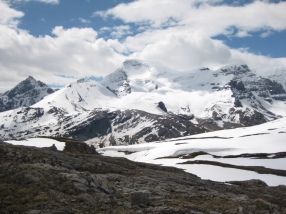 Of course, we did take time to do a few select hikes along the way. Our first was at Wilcox Pass, and proved that every hiking experience has its own unique flavor. This time we followed a ridge line high above the highway. It was wide open terrain, open to the wind, but providing constant views of the peaks around us. Passing above the tree line and into the meadow which formed the mountain pass, we were once again in the land of snow. We managed to continue forward progress crossing the snowy patches by literally following in the deep footsteps of earlier hikers. A few mis-steps revealed just how deep the snow really was! We ultimately reached a rocky pinnacle that provided a 360 degree panorama of snowy peaks. To travel beyond would have required snowshoes, and we were not that well prepared (but we did meet some hikers earlier who were – now we know why!). We took on our fill of the scene, took an abundance of photos, and mutually agreed that we had reached the far extent of our travels for that hike. 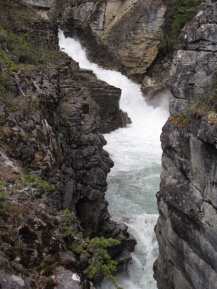 Or second hike was a hidden gem. Its only marking from the highway was a little hiker sign, and the initial path did not seem to hold much promise. But the Information Center guide had assured us there were six waterfalls, and he didn’t let us down. We soon came upon the lowest of Stanley Falls on Beauty Creek, and were captivated. The thundering creek had cut a deep gourge into the rocks, and the water tore downhill and around bends. We followed the trail upstream, marveling at how perilously close to the edge one could venture – it both afforded excellent views and invited danger. We did indeed find six falls, although it was almost continuous waterfall. It was a hike well worth doing, yet we didn’t meet anyone else on the trail. 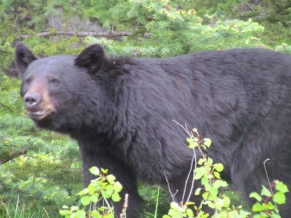 Finally, as we closed in on Jasper, our progress was further delayed by wildlife. What appeared to be a long pileup of cars at the side of the road up ahead turned out to be motorists gawking at a black bear. There he was, along side the road, leisurely eating and ambling along. Naturally we joined the throng and took our share of pictures. The next encounter was a gray wolf, frustrated in his attempt to cross the road, and we tracked him just barely in the woods (from the car) until he moved further inland. Our last encounter was with three elk on a smaller road, and they made it clear that they owned the roadway as they crossed in front of us.

Sometimes drives are not meant to be rushed. This was one of them. 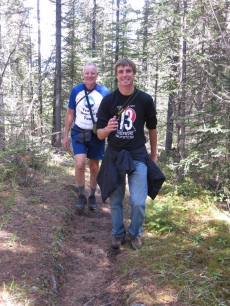 We could have been on a hiking trail in northern Minnesota. We traveled over well worn ground carpeted by pine needles, deep in a green forest with only the earliest spring wild flowers displaying their colors. Sunshine streaked through the branches, showering us with light only when the canopy allowed it through. Sounds of rushing water in overflowing spring streams were easily confused with the rustle of the wind in the treetops overhead. 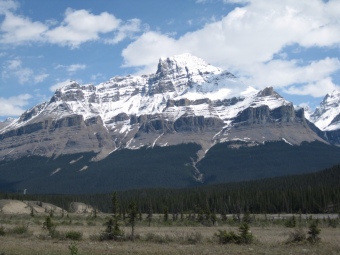 But as soon as a broader vista was available, the myth was dispelled and it was obvious we were in the Canadian Rockies. All it took was a bit of a break in the trees to see the snow covered peaks beyond. But even better were the overlooks, where we could see mountains in all directions. And every time we saw them, it felt new to us all over again. An amazing vista.

Today we were blessed with sunshine, blue sky and a return to summer! It helped that we followed the knowledgeable advice gained at the Information Center in Lake Louise and chose a hike at a lower elevation, known to be snow-free early in the season. It was a 9 km hike to Glacier Lake, which was over rolling terrain with one long climb up to a high ridge and then down to the shores of the lake. The spring runoff overwhelmed the trail at times, sending us scrambling for footholds or into the surrounding brush in an attempt to keep our feet dry. 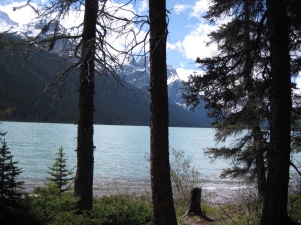 But arriving at the lake was the best part of all. We emerged from the woods to the shores of a turquoise blue lake ringed by snowy mountains. And not another sole in sight. We had a picnic lunch on the rocky beach, soaking up the sun and the view. A bit of quick exploration revealed 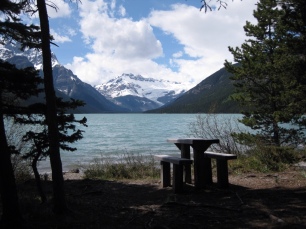 beautiful campsites right on the lake shore, and left us envious of others who would be staying the night in such a gorgeous location. We would all have traded our comfy cabin for a tent on the lake in a heartbeat. Even after significant lingering time, it was all we could do to tear ourselves away and begin our return trip. But then, it’s always better to leave wanting more.